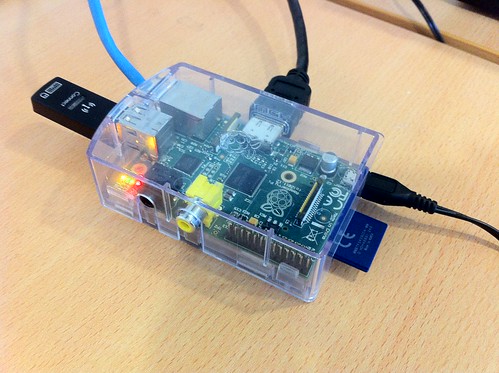 First look at our new Raspberry. This is a very tiny computer running Debian Linux and booting from an SD card. It was ordered from RS in the UK and took about 3 Months to arrive because they had a massive manufacturing backlog and high demand on the tiny machine. It uses a USB style power cable, has HDMI, Audio and Composite out. One of the two USB sockets has a wireless mouse controller in it and a CAT5 network cable is plugged in. So far it seems responsive and fast completing basic web browsing. Ideal for home media streaming, low heat, low power and very small. It is basically an ARM mobile phone without the phone.

made a nice small speaker box for my wife.she wanted some small speakers she could use to listen to her favourite airplay music around the house/garden.made a nice “handbag-design” for the speakers and fitted a raspberry-pi with wifi and a usb soundcard for better sound

and the amplifier in it.design was made by me in inkscape.lasered out of 3mm plywood at the fablab nuernberg.
the raspberry pi runs after this

I’ve been having a ridiculous amount of fun with this little craft project I read about on it i designed it using raspberry pi last week.

Definitely worth a look

how to install arduino mega 2560 drivers